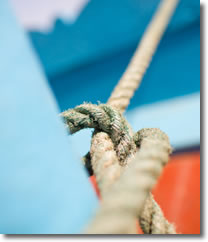 I recently read an interesting tidbit about distractions. It was a study that examined people’s different ways of coping with disturbances when trying to meditate. The study compared the brainwaves of three people: a non-meditator, a Hindu meditator, and a Zen master. While sitting, each subject was confronted with a sudden loud noise every three minutes.

Let me paraphrase the brief descriptions of the results from the book. When the non-meditator first heard the noise, he got agitated. The second time, he was again agitated, but a little less so. The third time, there was some minor agitation, and by the fourth, he pretty much ignored the noise.

So in other words, the non-meditator’s strategy is to stop paying attention, inure himself, and go into avoidance mode. It’s instinctive, really. As a species, we’re wired to run away from danger or harm. But when we apply this instinctive behavior to life at large, it can become counterproductive. Why? Because we desensitize ourselves to the world around us. By habitually shutting out unpleasant things, we end up doing the same for everything. We end up missing out on much of life itself.

The Hindu meditator didn’t react at all to the noise. He apparently didn’t even hear it. So it seems that Hindu meditation draws us so deeply into another world that sensory contact is curtailed. I really have no experience with this kind of meditation so I can’t say much about it, but it IS interesting to note how his response differed from that of the other two.

And as for the Zen master, he clearly heard the sound, but then immediately brought his attention back inward. Each time it was the same. He’d note the sound in exactly the same way, but would immediately go back in, returning to a state of stillness and calm. It’s like a nimble dance between outer and inner. He stayed engaged with and aware of the outside world but also remained anchored to a deeper and more stable place within to which he continually returned.

Staying engaged with things as they are

I think many of us come to meditation with the idea that it’s supposed to be something like the first two approaches. In other words, we assume meditation will bring us to a happier place where our problems won’t affect us, or where they’ll go away altogether. (By the way, I don’t mean to imply here that Hindu meditation is about making your problems go away. But I think many people mistakenly interpret meditation to be exact that.)

But the truth is, meditation isn’t about floating in some sort of otherworldly feel-good state. Mindfulness trains us to become more aware of things as they are – good, bad, or indifferent. That means any distractions – runaway thoughts, painful boredom, jittery restlessness – will remain very much a part of our experience.

The anchor of the breath

The work, then, is to stay completely open to it all, but also to continually bring ourselves back to the breath — the anchor of our still presence within. Rather than letting our thoughts and moods toss us around in all directions, we learn to stay with the tether of the breath and its natural ability to keep us calm and steady.

Another analogy that might be helpful is that of a ship’s captain. When a ship encounters a violent storm, an experienced captain knows what to do. He doesn’t run below deck to avoid it all (which would endanger everyone, including himself). He puts himself in the midst of the storm and surf so he can stay alert and respond to it appropriately. But at the same time relies on his cool presence (and knowledge and skill) to get everyone on board safely through.

Don’t dismay when find yourself distracted away. Think of it this way. Each time you notice and bring yourself back, that is a moment of awareness. We have such a human tendency to get down on ourselves for our failure, when in fact, what really happened is that we just became aware! This is good! It really doesn’t matter how many times you have to bring yourself back. Each time you do so you’re strengthening your awareness muscles so everything becomes easier over time. That is the practice.

So the next time you find yourself bothered by distractions of any kind, think of them as aids to your training. By coming back over and over again, you’ll be strengthening your ability to stay centered in the midst of whatever stormy weather that lies ahead.

This study is mentioned in the book Reflections on a Mountain Lake by Ani Tenzin Palmo, published by Snow Lion Publications, page 117-118.